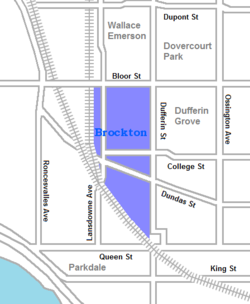 On April 13, 1812, Captain James Brock of the 49th Foot Regiment acquired title to Park Lot 30, Con. 1 in York, Upper Canada, in what is now Toronto, Ontario. Captain James Brock was the first cousin of Sir Isaac Brock. Their fathers were brothers. Sir Isaac Brock also employed his cousin as a Private Secretary but with limited success given Jame's dislike of writing letters. James acquired other land in Upper Canada but it is Lot 30 that would retain an association with the Brock name. Lot 30 ran from what is now Queen to Bloor Streets and is bisected by Brock Avenue. It would become the town of Brockton in 1881 until it was amalgamated in 1884 with the City of Toronto. The area survives today as the Toronto neighbourhood of Brockton. Actually, the person that is most responsible for the survival of the Brock name, in relation to the area, is Susannah Lucy Quirke Short, who became Mrs. Lucy Brock when she married James Brock in July 1812. Her role in perpetuating the name of Brock, after James died in 1830, is described as follows [1]:


So far as we know, Lucy Brock never lived in Toronto. But it is a testimony to her shrewdness and the good advice she was given that she undertook the subdivision of Park Lot 30 herself when it was ripe for development, rather than to sell it as one or two large parcels. While the area had come to be known as Brockton by 1850, her approach ensured that James’s name would attach itself even more firmly. In May 1850 surveyor John Tully was commissioned to prepare a plan of subdivision for Lot 30, with an axial road up the centre and twenty long and narrow lots facing Dundas Street where it intersected with Brock Avenue. Then she began offering building lots to smallholders; the first sale was made in July 1850. By the time she died in 1859 she had made more than three dozen such sales, a practice continued by her executors.


Brockton became a neighbourhood where various immigrant groups moved into as they made their way west from the Kesington Market area on their way to the suburbs. Eastern European Jewish immigrants were followed by Italians, Portuguese, then Vietnamese and now some Brazilians. I was raised in the area, at the intersection of Brock and Dundas, where the Portuguese wave was at its height. At the time, one could still find the remnants from earlier waves such as the J. Gould's clothing store, where Mr. Gould stubbornly insisted on remaining when others had moved. He did not seem to sell much of anything except oversize aprons decorated in bright colours or large flowers. Each day he could be found at the door of his store observing the street with a look of wry amusement.

My father and mother owned a restaurant on Dundas. It would open at 5 in the morning so that Portuguese construction workers could get their cigarettes, coffee - and sometimes something a little stronger- and then be picked up to go to various construction sites in other parts of the city. On the weekend, my parents could take it easy and open the restaurant as late as 9 am and after 11am on Sunday because we had to go to mass at St. Helen's Church. The weekends were usually noisy. What is now the Lula Lounge used to be a banquet hall. There was usually a wedding on Saturday nights during the summer. Around midnight, the wedding guests and families would sometimes spill out into the street to fight but usually just to escape the heat.


To the north, one could find Italian households who had not been fortunate to buy their homes further east nearer College Street in Little Italy. Everyone was an immigrant. Everyone's parents had been born outside of Canada. I can only remember one boy called  Rusty, because of his red hair, whose parents had been born in Canada. He stood out.


Today the Brockton neighbourhood still lacks the sheen of other trendier downtown neigbourhoods. Older immigrants remain who have decided that a move to Scarbourough, Vaughan or Mississauga was not for them. The suburbs though are coming to them. Younger couples are moving in and new restaurants are attracting others. The trendiness of the Annex and Little Italy is creeping in.


As I write this post, I can sense that I am not doing justice to the area or even to my memories of Brockton. I have conflated and distorted too many events, persons and sites. Colour and mostly the noise of it all is missing. If I cannot describe what I have experienced, what presumption to seek to describe what happened two hundred years ago. The past like a vast sea will not be circumscribed by words. But still the past, like the sea, calls us.

Notes
1.  This quote and most of the interesting information (the other is mine) from the excellent article "Brockton’s Name Recalls Isaac Brock’s Cousin James" from The Fife and Drum by Dan Brock, John England, Gillian Lenfestey, Stephen Otto, Guy St-Denis and Stuart Sutherland which can be found here.
Posted by FAASouza