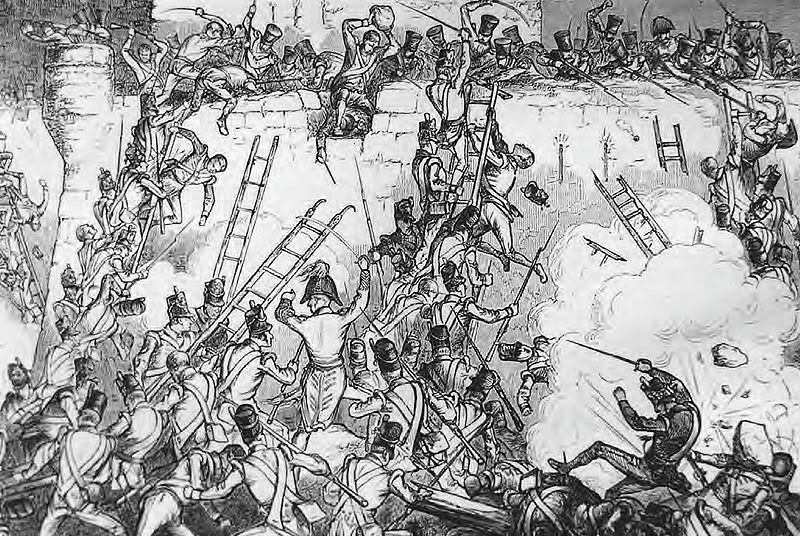 Our division formed for the attack of the left breach in the same order as at Ciudad Rodrigo; the command of it had now devolved upon our commandant, Colonel Barnard. I was then the acting adjutant of four companies, under Colonel Cameron, who were to line the crest of the glacis and to fire at the ramparts and the top of the left breach.


The enemy seemed aware of our intentions. The fire of artillery and musketry, which, for three weeks before, had been incessant, both from the town and trenches, had now entirely ceased, as if by mutual consent, and a death-like silence, of nearly an hour, preceded the awful scene of carnage.


The signal to advance was made about nine o'clock and our four companies led the way. Colonel Cameron and myself had reconnoitred the ground so accurately by daylight that we succeeded in bringing the head of our column to the very spot agreed on, opposite to the left breach, and then formed line to the left without a word being spoken, each man lying down as he got into line, with the muzzle of his rifle over the edge of the ditch between the pallisades, all ready to open. It was tolerably clear above, and we distinctly saw their heads lining the ramparts; but there was a sort of haze on the ground which, with the colour of our dress, prevented them from seeing us, although only a few yards asunder. One of their sentries, however, challenged us twice, "qui vive," and, receiving no reply, he fired off his musket, which was followed by their drums beating to arms; but we still remained perfectly quiet, and all was silence again for the space of five or ten minutes, when the head of the forlorn hope at length came up and we took advantage of the first fire while the enemy's heads were yet visible.


The scene that ensued furnished as respectable a representation of hell itself as fire and sword and human sacrifices could make it; for in one instant every engine of destruction was in full operation.

It is in vain to attempt a description of it. We were entirely excluded from the right breach by an inundation which the heavy rains had enabled the enemy to form and the two others were rendered totally impracticable by their interior defences.


The five succeeding hours were therefore passed in the most gallant and hopeless attempts on the part of individual officers forming up fifty or a hundred men at a time at the foot of the breach and endeavouring to carry it by desperate bravery; and, fatal as it proved to each gallant band in succession, yet, fast as one dissolved, another was formed. We were informed, about twelve at night, that the third division had established themselves in the castle; but, as its situation and construction did not permit them to extend their operations beyond it at the moment, it did not in the least affect our opponents at the breach, whose defence continued as obstinate as ever.


I was near Colonel Barnard after midnight, when he received repeated messages from Lord Wellington to withdraw from the breach and to form the division for a renewal of the attack at daylight; but, as fresh attempts continued to be made, and the troops were still pressing forward into the ditch, it went against his gallant soul to order a retreat while yet a chance remained; but, after heading repeated attempts himself, he saw that it was hopeless and the order was reluctantly given about two o'clock in the morning. We fell back about three hundred yards and re-formed all that remained to us.


Our regiment alone had to lament the loss of twenty-two officers killed and wounded, ten of whom were killed, or afterwards died of their wounds. We had scarcely got our men together when we were informed of the success of the fifth division in their escalade and that the enemy were, in consequence, abandoning the breaches and we were immediately ordered forward to take possession of them. On our arrival we found them entirely evacuated, and had not occasion to fire another shot; but we found the utmost difficulty, and even danger, in getting in in the dark, even without opposition. As soon as we succeeded in establishing our battalion inside, we sent piquets into the different streets and lanes leading from the breach and kept the remainder in hand until day should throw some light on our situation.