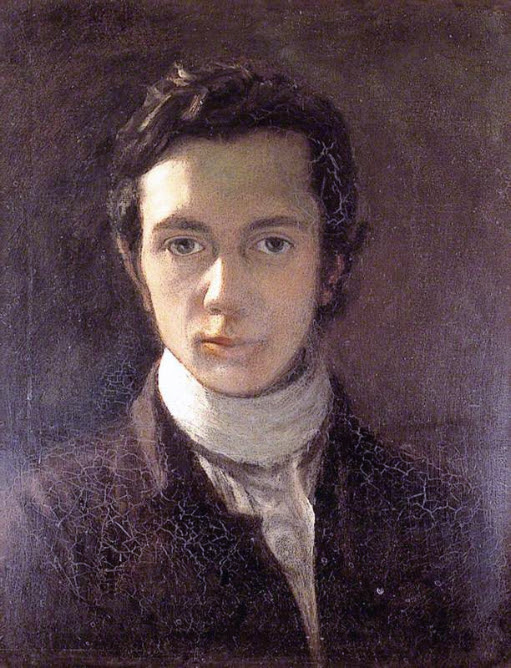 On April 27 1812, William Hazlitt gave a lecture with Henry Crabb Robinson there to take note and write about it in his  diary. Robinson is best known as a diarist who, in his Diary, Reminiscences and Correspondence, recorded lectures, observations and conversations with many famous writers of his time including William Hazlitt, William Godwin, Robert Southey, Samuel Taylor Coleridge, Charles Lamb and William Blake.


William Hazlitt was an English writer, journalist, philosopher, who is now best known for his literary criticism. Hazlitt gave his first public lecture on January 14, 1812. It was not a great success. Robinson writes:

Heard first lecture by William Hazlitt on "History of English Philosophy." He seems to have no conception of the difference between a lecture and book. What he said was  sensible and excellent,  but he delivered himself in a low monotonous voice with his eyes fixed on his M.S. not once daring to look at his audience; and he read so rapidly that no one could possibly give to the matter the attention it required.

Tuesday, January 14, 1812, Hazlitt faced his first audience in the  rooms of the Russell Institution. His topic, as announced, was "The Writings of Hobbes, showing that he was the father of the modern system of philosophy." According to Crabb Robinson, the secretary of the institution, a Mr. Flack, told him just before the lecture that he must restrict himself to one hour. He had, unfortunately, material enough to last three hours—and he attempted to disgorge it all in an hour's time. The result was disastrous.

He began by reading passages from the prospectus which he had prepared for his history of English philosophy, declaring that he was interested not so much in tracing the history of English philosophy as in criticizing false philosophy and formulating more sensible principles. He was off to a bad start with those of his audience who had come for information rather than theory. And they must have grown increasingly restless as he developed his thesis—that modern philosophy stemmed from Hobbes, not Locke, and that Hobbes, though original, was dead wrong—by reading long excerpts from Hobbes's work with occasional critical comments of his own...

The next day, Hazlitt played cards with Robinson. Hazlitt was much depressed. Robinson noted that Hazlitt "seemed disposed to give up the lectures altogether."  However, Hazlitt continued and gave a further lecture on January 21, 1812 with better results. Again, Robinson attended and wrote the following about the lecture:


Hazlitt's second lecture. His delivery vastly improved and I hope he will now get on.  He read at Basil Montagu's last night half his first lecture. He was to read the whole but abruptly broke off and could not be persuaded to read the remainder.  Lamb and other friends were there.

Hazlitt gave a further lecture on April 27th with Robinson again in the audience:

April 27th.—At Hazlitt's last lecture. Very well delivered, and full of shrewd observation. At the close, he remarked on the utility of metaphysics. He quoted and half-assented to Hume's sceptical remark, that perhaps they are not worth the study, but that there are persons who can find no better mode of amusing themselves. He then related an Indian legend of a Brahmin, who was so devoted to abstract meditation, that in the pursuit of philosophy he quite forgot his moral duties, and neglected ablution. For this he was degraded from the rank of humanity, and transformed into a monkey. But, even when a monkey, he retained his original propensities, for he kept apart from other monkeys, and had no other delight than that of eating cocoanuts and studying metaphysics. "I, too," said Hazlitt, "should be very well contented to pass my life like this monkey, did I but know how to provide myself with a substitute for cocoanuts.