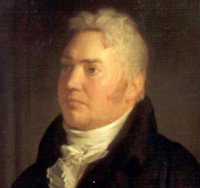 On April 21, 1812, Samuel Taylor Coleridge, now in London, writes to his long suffering wife Sarah in Keswick. The letter demonstrates all of Coleridge's brilliance,  loquacious charm and infuriating self absorption. Coleridge is preparing for a new series of lectures that he hopes will be as successful as the ones he gave earlier in the year. Coleridge remains estranged from Wordsworth but is unaware that Wordsworth is even now descending on London to confront him. Coleridge writes:

My dear Love, — Everything is going on so very well, so much beyond my expectation, that I will not revert to anything unpleasant to damp good news with. The last receipt for the insurance is now before me, the date the 4th of May. Be assured that before April is past, you shall receive both receipts, this and the one for the present year, in a frank.

In the first place, my health, spirits, and disposition to activity have continued such since my arrival in town, that every one has been struck with the change, and the Morgans say they had never before seen me myself. I feel myself an altered man, and dare promise you that you shall never have to complain of, or to apprehend, my not opening and reading your letters. Ever since I have been in town, I have never taken any stimulus of any kind, till the moment of my getting into bed, except a glass of  British white wine after dinner, and from three to four glasses of port, when I have dined out. Secondly, my lectures have been taken up most warmly and zealously by Sir Thomas Bernard, Sir George Beaumont, Mr. Sotheby, etc., and in a few days, I trust that you will be agreeably surprised with the mode in which Sir T. B.hopes and will use his best exertions to have them announced. Thirdly, Gale and Curtis are in high spirits and confident respecting the sale of " The Friend,"  and the call for a second edition, after the complemental numbers have been printed, and not less so respecting the success of the other work, the Propasdia (or Propaideia) Cyclica, and are  desirous to have the terms properly ratified, and signed as soon as possible. Nothing intervenes to overgloom my mind, but the sad state of health of Mr.Morgan, a more faithful and zealous friend than whom no man ever possessed. Thank God! my safe arrival, the improvement of my health and spirits, and my smiling prospects have already exerted a favourable influence on him. Yet I dare not disguise from myself that there is cause for alarm to those who love and value him. But do not allude to this subject in your letters, for to be thought ill or to have his state of health spoken of, agitates and depresses him.

As soon as ever I have settled the lecture room, which perhaps will be Willis's in Hanover Square, the price of which is at present ten guineas a time, I will the very first thing pay the insurance and send off a parcel of books for Hartley, Derwent, and dear Sara, whom I kissed seven times in the shape of her pretty letterlet.

My poor darling Derwent  I shall be most anxious to receive a letter from you, or from himself, about him.

In giving my love to Mrs. Lovell, tell her that I have not since the day after my arrival been able to go into the city, my business having employed me wholly either in writing or in traversing the West End of the town. I dined with Lady Beaumont and her sister on Saturday, for Sir George was engaged to Sir T. Bernard. He how ever came and sat with us to the very last moment, and I dine with him to-day, and Allston is to be of the party. The bust and the picture from Genevieve are at the Royal Academy, and already are talked of. Dawe and I will beof mutual service to each other. As soon as the pictures are settled, that is, in the first week of May, he means to  treat himself with a fortnight's relaxation at the Lakes.
He is a very modest man, his manners not over polished, and his worst point is that he is (at least, I have found him so) a fearful questionist, whenever he thinks he can pick up any information, or ideas, poetical, historical, topographical, or artistical, that he can make bear on his profession. But he is sincere, friendly, strictly moral in every respect, I firmly believe even to innocence, and in point of cheerful indefatigableness of industry, in regularity, and temperance — in short, in a glad, yet quiet, devotion of his whole being to the art he has made choice of, he is the only man I ever knew who goes near to rival Southey — gentlemanly address, person, physiognomy, knowledge, learning, and genius being of course wholly excluded from the comparison. God knows my heart! and that it is my full belief and conviction, that taking all together, there does not exist the man who could without flattery or delusion be called Southey's equal. It is quite delightful to hear how he is spoken of by all good people. Dawe will doubtless tahe him. Were S. and I rich men, we would have ourselves and all of you, short and tall, in one family picture. Pray receive Dawe as a friend. I called on Murray, who complained that by Dr. Bell's delays and irresolutions and scruples, the book " On the Origin,"  etc., instead of 3,000 in three weeks, which he has no doubt would have been the sale had it been brought out at the fit time, will not now sell 300. I told him that I believed otherwise, but much would depend on the circumstance whether temper or prudence would have most influence on the Athenian critic and his friend Brougham. If, as I hoped, the former, and the work should be reviewed in the " Edinburgh Review," if they took up the gauntlet thrown at them, then there was no doubt but that a strong tide of sale would set in. Though verily this gauntlet was of weighty metal, though of polished steel, and being thrown at rather than down it was challenging a man to fight by a blow that threatened to brain him. I have seen Dr. Bell and shall dine with him at Sir T. Bernard's on Monday next. The venerable Bishop of Durham has sent me a very kind mes sage, that though he cannot himself appear in a hired lecture room, yet he will be not only my subscriber but use his best influence with his acquaintance. I am very anxious that my books should be sent forward as soon as possible. They may be sent at three different times, with a week's intervention. But there is one, scarcely a book, but a collection of loose sheets tied up together at Grasmere, which I want immediately, and, if possible, would have sent up by the coach from Kendal or Penrith. It is a German Romance with some name beginning with an A, followed by " oder Die Gluckliche Inseln." It makes two volumes, but several of the sheets are missing, at least were so when I put them together. If sent off immediately, it would be of serious benefit to me in my lectures. Miss Hutchinson knows them, and will probablyrecollect the sheets I allude to, and these are what I especially want.

One pair only of breeches were in the parcel, and I am sadly off for stockings, but the white and under ones I can buy here cheap, but if young Mr. White could procure half a dozen or even a dozen pair of black silk made as stout and weighty as possible, I would not mind giving seventeen shillings per pair, if only they can be relied on, which one cannot do in London. A double knock. I meant to read over your letter again, lest I should have forgot anything. If I have, I will answer it in my next.
God bless you and your affectionate husband,

Has Southey read " Childe Harold " All the world is talking of it. I have not, but from what I hear it is exactly on the plan that I myself had not only conceived six years ago, but have the whole scheme drawn out in one of my old memorandum books. My dear Edith, and my dear Moon!  Though I have scarce room to write it, yet I love you very much.
Posted by FAASouza