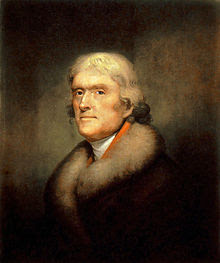 On April 2, 1812, Thomas Jefferson writes to Hugh Nelson a Democratic-Republican representative from Virginia. Jefferson, in the letter reproduced below, says that war is now "necesary" and that there should not be any further delay. Jefferson does not express these sentiments directly but says they are it is what everyone else believes. Jefferson writes as Congress is debating legislation for a general embargo on shipping which many see as the first step in a war with Britain.

Your letter of March 22d has been duly received.  By this time a printed copy of my MS. respecting the Batture has I hope been laid on your desk, by which you will perceive that the MS. itself has been received long enough to have been sent to New York, printed and returned to Washington. On the subject of the omission of the officers of the Virginia State line, in the provisions and reservations of the cession of Congress, my memory enables me to say nothing more than that it was not through inattention, as I believe, but the result of compromise.  But of this the President, who was in Congress when the arrangement was settled, can give the best account.  I had nothing to do but execute a deed according to that arrangement, made previous to my being a member. Colonel Monroe being a member with me, is more likely to remember what passed at that time;  but the best resource for explanation of everything we did, is in our weekly correspondence with the Governor of Virginia, which I suppose is still among the Executive records.  We made it a point to write a letter to him every week, either jointly, or individually by turns. You request me to state the public sentiment of our part of the country as to war and the taxes.  You know I do not go out much.  My own house and our court yard are the only places where I see my fellow citizens.  As far as I can judge in this limited sphere, I think all regret that there is cause for war, but all consider it as now necessary, and would, I think, disapprove of a much longer delay of the declaration of it.  As to the taxes, they expect to meet them, would be unwilling to have them postponed, and are only dissatisfied with some of the subjects of taxation;  that is to say the stamp tax and excise.  To the former I have not seen a man who is not totally irreconcilable.  If the latter could be collected from those who buy to sell again, so as to prevent domiciliary visits by the officers, I think it would be acceptable, and I am sure a wholesome tax.  I am persuaded the Secretary of the Treasury is mistaken in supposing so immense a deduction from the duties on imports.  We shall make little less to sell than we do now, for no one will let his hands be idle;  and consequently we shall export not much less, and expect returns.  Some part will be taken on the export and some on the import.  But taking into account the advance of prices, that revenue will not f all so far short as he thinks;  and I have no doubt might be counted on to make good the entire suppression of the stamp tax.  Yet, although a very disgusting pill, I think there can be no question the people will swallow it, if their representatives determine on it.  I get their sentiments mostly from those who are most in the habit of intercourse with the people than I am myself.  Accept the assurance of my great esteem and respect.