On April 23, 1812, Thomas Moore published a satirical poem in the Morning Chronicle entitled "The Insurrection of the Papers".  Moore begins his poem by quoting a speech by Lord Castlereagh dealing with John M'Mahon appointment as private secretary to the Prince Regent. A sinecure for him had recently been debated in Parliament. M'Mahon's was notorious for procuring female companions for the Prince Regent.  Moore is again engaging in the Whig's critique of the Prince Regent but has added a new target in the person of Lord Castlereagh who had just joined the cabinet as foreign minister. Moore's poem again demonstrates that poetry in 1812 played a more varied and central role in the culture than it does today.  Moore's poem is reproduced below: 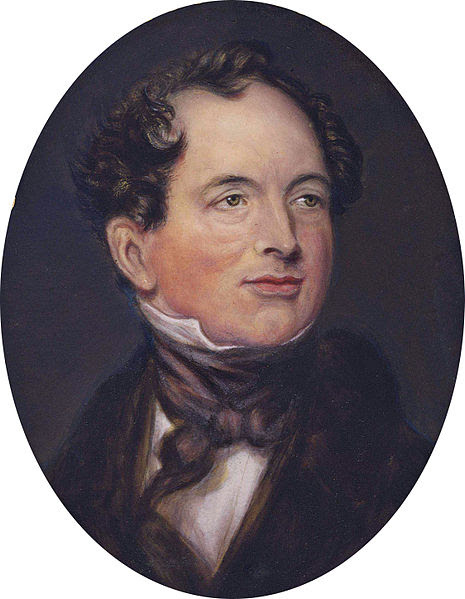 "It would be impossible for his Royal Highness to disengage his person from the accumulating pile of papers that encompassed it." --Lord CASTLEREAGH'S _Speech upon Colonel M Mahon's Appointment, April 14, 1812_.

Last night I tost and turned in bed,
But could not sleep--at length I said,
"I'll think of Viscount Castlereagh,
"And of his speeches--that's the way."
And so it was, for instantly
I slept as sound as sound could be.
And then I dreamt--so dread a dream!
Fuseli has no such theme;
Lewis never wrote or borrowed
Any horror half so horrid!


Methought the Prince in whiskered state
Before me at his breakfast sate;
On one side lay unread Petitions,
On t'other, Hints from five Physicians!
_Here_ tradesmen's bills,--official papers,
Notes from my Lady, drams for vapors
_There_ plans of Saddles, tea and toast.
Death-warrants and _The Morning Post_.


When lo! the Papers, one and all.
As if at some magician's call.
Began to flutter of themselves
From desk and table, floor and shelves,
And, cutting each some different capers,
Advanced, oh jacobinic papers!
As tho' they said, "Our sole design is
"To suffocate his Royal Highness!"
The Leader of this vile sedition
Was a huge Catholic Petition,
With grievances so full and heavy,
It threatened worst of all the bevy;
Then Common-Hall Addresses came
In swaggering sheets and took their aim
Right at the Regent's well-drest head,
As if _determined_ to be read.
Next Tradesmen's bills began to fly,
And Tradesmen's bills, we know, mount high;
Nay even Death-warrants thought they'd best
Be lively too and join the rest.


But, oh the basest of defections!
His letter about "predilections"!--
His own dear letter, void of grace,
Now flew up in its parent's face!
Shocked with this breach of filial duty,
He just could murmur "_et_ Tu _Brute_?"
Then sunk, subdued upon the floor
At Fox's bust, to rise no more!


I waked--and prayed, with lifted hand,
"Oh! never may this Dream prove true;
"Tho' paper overwhelms the land,
"Let it not crush the Sovereign, too!"