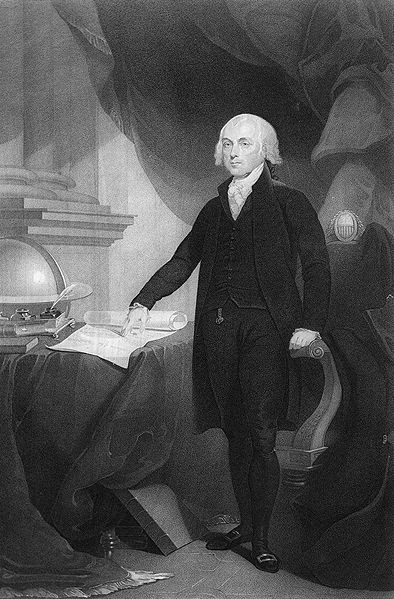 On April 3, 1812, President James Madison writes to Thomas Jefferson to provide him with news of the political situation in Great Britain and Congress.  Madison writes that there has been no change in the British policy concerning the Orders in Council. Percival remains as Prime Minister and would "prefer war with us, to a repeal of their Orders in Council." Madison is resigned to war writing "We have nothing left therefore, but to make ready for it." Madison's preparation for war is to propose legislation imposing an embargo on American ships from going to foreign ports. He proposed the legislation on April 1, 1812. The House is again debating the Embargo bill on April 3 after the Senate amended the legislation to provide for a ninety day period rather than the sixty days proposed by Madison. The law will be passed today and signed by Madison on April 4, 1812. It will mean that all American ships and vessels in the ports of the United States, for a period of ninety days, cannot  leave for foreign ports. The only exceptions are those authorized by the President. Madison retains a very slim hope that war can be avoided during the interim. He writes to Jefferson that the embargo may "lead to admissible overtures, before the sword is stained with blood." He is quick to add that"Such an effect is not to be counted upon."

Dear Sir,—I have recd. your favor of the 26th, and have made to the members of the Cabinet the communication you suggest with respect to your printed Memoir on the Batture. I learn from the Department of State that some books were recd. for you, and duly forwarded. What they were was not ascertained or remembered. If they do not on their arrival correspond with your expectation, let me know, & further enquiry will be made. Meantime there is in my possession, a very large packet, addressed to you, which is probably a Continuation of Humboldts draughts, or other Maps. It was accompanied by no letter to me, and being unfit for the mail, waits for the patronage of some trusty traveller, bound in the stage towards Monticello. A late arrival from G.B. brings dates subsequent to the maturity of the Prince Regent’s authority. It appears that Percival, &c, are to retain their places, and that they prefer war with us, to a repeal of their Orders in Council. We have nothing left therefore, but to make ready for it. As a step to it an embargo for 60 days was recommended to Congs on Wednesday, and agreed to in the H. of Reps. by about 70 to 40. The Bill was before the Senate yesterday, who adjourned about 4 or 5 o’Clock without a decision. Whether this result was produced by the rule which arms a single member with a veto agst. a decision in one day on a bill, or foretells a rejection of the Bill I have not yet heard. The temper of that body is known to be equivocal. Such a measure, even for a limited and short time, is always liable to adverse as well as favorable considerations; and its operations at this moment, will add fuel to party discontent, and interested clamor. But it is a rational & provident measure, and will be relished by a greater portion of the Nation, than an omission of it. If it could have been taken sooner and for a period of 3 or 4 months, it might have enlisted an alarm of the B. Cabinet, for their Peninsular System on the side of Concessions to us; and wd. have shaken their obstinacy, if to be shaken at all; the successes on that Theatre being evidently their hold on the P. Regt. and the hold of both on the vanity & prejudices of the Nation. Whether if adopted for 60 days, it may beget apprehensions of a protraction, and thence lead to admissible overtures, before the sword is stained with blood, cannot be foreknown with certainty. Such an effect is not to be counted upon. You will observe that Liverpool was Secy. for the Foreign Dept. ad interim, & that Castlereagh is the definitive successor of Wellesley. The resignation of this last, who has recd. no other appt. is a little mysterious. There is some reason for believing that he is at variance with Percival, or that he distrusts the stability of the existing Cabinet, and courts an alliance with the Grenville party, as likely to overset it. If none of that party desert their colours, the calculation cannot be a very bad one; especially in case of war with the U. S., in addition to the distress of Br trade & manufactures, and the inflammation in Ireland; to say nothing of possible reverses in Spain & Portugal, which alone would cut up the Percival ascendency by the roots. From France we hear nothing. The delay of the Hornet is inexplicable, but on the reproachful supposition that the F. Govt. is waiting for the final turn of things at London, before it takes its course, which justice alone ought to prescribe towards us. If this be found to be its game, it will impair the value of concessions if made, and give to a refusal of them, consequences it may little dream of.

Be assured of my constant and sincerest attachment.

I understand the Embargo will pass the Senate to-day, and possibly with an extension of the period to 75 or 90 days.