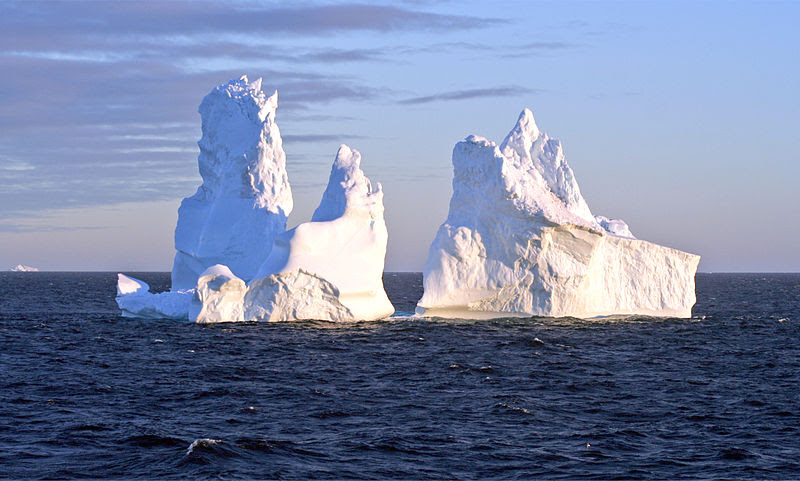 On April 23, 1812, Captain Potter,  to "gratify" Aaron Burr,  maneuvers the Aurora to within three to four hundred yards of an "ice-island" or iceberg. Burr has been on the Aurora sailing for Boston since March 26, 1812. He describes the ice-islands in the private journal that he kept for his daughter. He saw a number of icebergs on April 23rd. He described the one that he got closest to as having a stupendous height and grandeur rising out of the water like a perpendicular rock of alabaster or white marble. The entry for April 23 is reproduced below:


[April 1812] 23. The Captain called me up at 6 this morning to see some ice-islands, a spectacle not expected in this latitude, nor at this season in any latitude. There were several small floating masses of ice around us. One or two of them were two or three yards out of water, and this corresponded with the idea I had formed of islands of floating ice. At the same time, however, was discovered another island, supposed to be then about a league ahead. But though we were six knots an hour, it was fifteen minutes past 10 before we came abreast of this last.

The Captain, to gratify me, went as near as he durst, perhaps within three or four hundred yards. As we approached, we were astonished at the stupendous height and grandeur of this object. It presented to the Northward and Eastward, the side on which we passed, a perpendicular rock of alabaster or white marble, of an elevation of  not less than 250 feet, having a small declivity towards the South; so that at the Southern extremity it had not apparently more than thirty or forty feet elevation,but at the Southeast corner it shelved away to the water's edge. It presented the appearance of a parallelogram of four or five hundred feet by two or three hundred. No doubt it was aground, as the highest part was towards the wind. Just after discovering this,  i. e. at 7 o'clock, we discovered two others, bearing nearly North from us, both of them much larger, and one of them much higher than that which I have described; but, being more out of our course, we did not attempt to approach them. One of them was certainly ten times the size of that which we examined, but I think not quite so high. At 10 saw two more bearing Northwest. One of them presented the appearance of two obelisks, or two lighthouses of white marble. But this was undoubtedly afloat, for it offered a newphase at every ten minutes. Sometimes a solid mass,then an obelisk and a pyramid, then a church with asteeple, and repeating all these changes. The temperature of the water at 8 o'clock was 34, and we found bottom at eighty fathoms, but whether on the east orwest edge of the bank, we doubt, though the bank ismore than 100 miles across, so little accurate is our longitude. The two Captains, however, seem verypositive that it is the East edge, and that we are justcoming on the Grand Bank. We are to sound again at  2 P. M. Latitude 45 56', though our course has beenN. N. W. Still a Southern current, you see. Theseice islands are naughty things. If a ship going at sixor seven knots should come in contact with one ofthem, the shock would certainly be fatal. We must have run the gauntlet last night. Nothing but the vicinity of ice could have give us water of the temperature of 34. At 3 we hove to and threw our lead,but could find no bottom. We have continued tosail at about six knots, with a fair wind, a serene sky, and a smooth sea. Could not have wished a finer day.