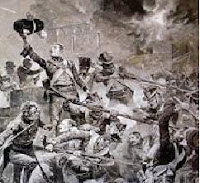 On April 8, 1812, the British and Portuguese troops continue their looting of Badajoz. Captain John Kincaid describes:

We went into the town on the morning of the 8th to endeavour to collect our men, but only succeeded in part, as the same extraordinary scene of plunder and rioting still continued. Wherever there was any thing to eat or drink, the only saleable commodities, the soldiers had turned the shopkeepers out of doors and placed themselves regularly behind the counter, selling off the contents of the shop. By and bye another and a stronger party would kick those out in their turn, and there was no end to the succession of self-elected shopkeepers until Lord Wellington found that, to restore order, severe measures must be resorted to. On the third day he caused a Portuguese brigade to be marched in and kept standing to their arms, in the great square, where the provost-martial erected a gallows and proceeded to suspend a few of the delinquents, which very quickly cleared the town of the remainder and enabled us to give a more satisfactory account of our battalion than we had hitherto been able to do.

It is wonderful how such scenes as these will deaden men's finer feelings, and with what apathy it enables them to look upon the sufferings of their fellow creatures! The third day after the fall of the town, I rode, with Colonel Cameron, to take a bathe in the Guadiana, and in passing the verge of the camp of the 5th division, we saw two soldiers standing at the door of a small shed, or outhouse, shouting, waving their caps and making signs that they wanted to speak to us. We rode up to see what they wanted and found that the poor fellows had each lost a leg. They told us that a surgeon had dressed their wounds on the night of the assault, but that they had ever since been without food or assistance of any kind, although they, each day, had opportunities of soliciting the aid of many of their comrades, from whom they could obtain nothing but promises. In short, surrounded by thousands of their countrymen within call, and not more than three hundred yards from their own regiment, they were unable to interest any one in their behalf, and were literally starving.


It is unnecessary to say that we instantly galloped back to the camp and had them removed to the hospital.


On the morning of the 7th, when some of our officers were performing the last duties to their fallen comrades, one of them had collected the bodies of four of our young officers who had been slain. He was in the act of digging a grave for them when an officer of the guards arrived on the spot from a distant division of the army and demanded tidings of his brother, who was at that moment lying a naked lifeless corpse under his very eyes. The officer had the presence of mind to see that the corpse was not recognized, and, wishing to spare the other's feelings, told him that his brother was dangerously wounded, but that he would hear more of him by going out to the camp; and thither the other immediately bent his steps, with a seeming presentiment of the sad intelligence that awaited him.

April 9th. — As I had not seen my domestic since the storming of the town, I concluded that he had been killed; but he turned up this morning, with a tremendous gash on his head, and mounted on the top of a horse nearly twenty feet high, carrying under his arm one of those glass cases which usually stand on the counters of jewellers' shops, filled with all manner of trinkets. He looked exactly like the ghost of a horse pedler.

April 10th. — The devil take the man who stole my donkey last night.


April 11th. — Marched again for the neighbourhood of Ciudad Rodrigo, with the long-accustomed sounds of cannon and musketry ringing in my fanciful ears as merrily as if the instruments themselves were still playing.