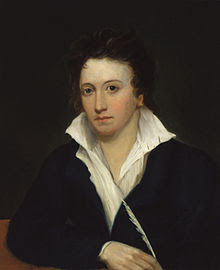 On June, 11  1812, Percy Bysshe Shelley again writes to William Godwin. Shelley is still living at Nantgwilt in Radnorshire, Wales but already has plans to leave within a week.  He tells Godwin that he has outline of what will  become A Letter to the Lord Elleborough in defence of Isaac Daniel Eaton. Lord Elleborough had been the presiding judge at the trial that convicted  Eaton of "blasphemous libel." Eaton had printed part three of Thomas Paine's Age of Reason. He was sentence to eighteen months in Newgate Prison and a monthly pillorying for the entire term of his sentence.  Shelley`s letter is reproduced below.

I will no longer delay returning my grateful and cordial acknowledgments for your inestimable letter of March 30. That it is most affectionate and kind, I deeply feel and thankfully confess. I can return no other answer, than that I will become all that you believe and wish me to be. I should regard it as my greatest glory, should I be judged worthy to solace your declining years; it is a pleasure, the realisation of which, I anticipate with confident hopes, and which it shall be my study to deserve. I will endeavour to subdue the impatience of my nature, so incompatible with true benevolence.


I know, that genuine philanthropy does not permit its votaries to relax, even when hope appears to languish, or to indulge bitterness of feeling against the very worst, the most mistaken of men.


To these faults in a considerable degree I plead guilty; at all events, I have now a stimulus adequate to excite me to the conquest of them.


I yet know little of the chivalric age. The ancient romances, in which are depicted the manners of those times, never fell in my way. I have read Southey's Amadis of Gaul and Palmerin of England, but at a time when I was little disposed to philosophize on the manners they describe. I have also read his Chronicle of the Cid. It is written in a simple and impressive style, and surprised me by the extent of accurate reading evinced by the references. But I read it hastily, and it did not please me, so much as it will on a reperusal, seasoned by your authority and opinion. It requires no great study to attain an intimate knowledge of Grecian and Roman history; it requires but common feeling to appreciate and acknowledge the resplendent virtues with which it is replete. The first doubts, which arise in boyish minds concerning the genuineness of the Christian religion, as a revelation from the divinity, are often excited by a contemplation of the virtues and genius of Greece and Rome. Shall Socrates and Cicero perish, whilst the meanest hind of modern England inherits eternal life?


I mean not to affirm, that this is the first argument, with which I would combat the delusions
of superstition; but it certainly was one of the first that operated to convince men, that they were delusions. What do you think of Eaton's trial and sentence ? I mean not to insinuate that this poor bookseller has any characteristics in common with Socrates, or Jesus Christ, still the spirit which pillories and imprisons him, is the same which brought them to an untimely end—still, even in this enlightened age, the moralist and reformer may expect coercion analogous to that used with the humble yet zealous imitator of their endeavours. I have thought of addressing the public on the subject, and indeed have begun an outline of the address. May I be favoured with your remarks on it before I send it to the world?

We are unexpectedly compelled to quit Nantgwilt. I hope, however, before long time has elapsed, to find a home. These accidents are unavoidable to a minor. I hope wherever we are, you, Mrs. Godwin, and your children will come this summer.

I do not suppose we shall remain here longer than a week. All letters directed here will securely and certainly be forwarded. Harriet desires to join me in everything, that is respectful and affectionate to yourself, Mrs. G., and family, my venerated friend. Believe me to remain yours most sincerely,
P. B. Shelley.