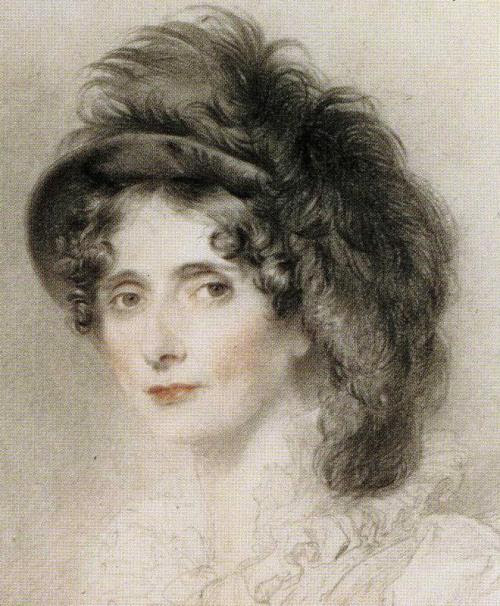 On June 2, 1812, Elizabeth, Duchess of Devonshire, writes again to her son in Washington, Augustus Foster, the British Minister in America. She writes about the attempts to form a new government in Britain. The government of Earl of Liverpool had resigned as a result of losing a vote on a motion.  Lord Wellesley  and Lord Moira are trying to form a new government but without much success. Of note, the Whig opposition appears to be taking the position that it is "unconstitutional for the Sovereign to name any of the Ministers except the first Lord who is to form it." The Tories are of the view the Prince Regent can name all members of the government. The letter ends by adding the customary comments about Annabella Milbanke. The Duchess writes: "Your Annabella is a mystery; liking, not liking; generous minded, yet afraid of poverty; there is no making her out. I hope you don't make yourself unhappy about her; she is really an icicle". She goes on to pass on the rumor that Lady Milbanke is trying to have her husband, Sir Ralph Milbanke, run in the next election. She notes that it will be a "contested" election so it may ruin him financially. The Duchess' letter is reproduced below.

I wrote to you about a fortnight ago, just after poor Mr. Perceval's horrid assassination, and we have continued since that without an administration. Lord Liverpool was named first Lord of the Treasury, but not kissed hands, and Mr. Wortley's motion obliged them to resign. The Regent then sent to Lord Wellesley to form or propose a plan for a new administration, and Lord Wellesley brought about a reconciliation between the Regent and Lord Moira. Both these Peers have tried to make arrangements for opposition to come in, but the Prince could not be prevailed on to admit them. Down to the 30th nothing was done. The Prince saw all parties, except Grey and Grenville, but nothing could be fixed on. The ex-Ministers, except Lord Melville, declare that they won't serve with Lord Wellesley.

At last, yesterday, Canning announced in the House that Lord Wellesley had the Prince's authority to proceed to the forming of a new administration, and he did submit a paper to them. The Prince expressed a wish to have Moira, Erskine, and Ellenborough in the Cabinet; they were (Grey and Grenville) to name the others of their party, making five opposition Cabinet Ministers if the number was 1 2, and six if it was 13 — Lord Wellesley, of course, to name the others. Well, all appeared smooth and promising when, behold! opposition find out that it is unconstitutional for the Sovereign to name any of the Ministers except the first Lord who is to form it; and so they refuse. My brother says that the talk of the streets was to blame the opposition; to say that the Sovereign has a right to name his Ministers, and that the opposition have refused on grounds of personal ambition. This is a most provoking denouement. I will hope that something may yet be done, but it is a faint hope; however, I will add to-morrow what I hear; it must, I think, be decided one way or another. The Liverpools have been very much hurt with Wortley, but he went to him first, and did it in a feeling and gentlemanlike manner. The truth is, the administration have been weak to a criminal degree.

Lady Erne was so fretted and vexed that she went back to Hampton Court. Lady Hervey is with me,cheerful and good-humoured as she always is. Caroline W. Lamb is quietly, thank heaven! at Brocket with William and all of them. My Caroline is more than ever liked and admired — pur non e felice. Your Annabella is a mystery; liking, not liking; generous minded, yet afraid of poverty; there is no making her out. I hope you don't make yourself unhappy about her; she is really an icicle. Lady Milbanke will make Sir Ralph stand the next election, which, as it will be a contested one, will ruin him, and he is with one foot in the grave; so it is doubly ill-judged. The rest of your friends are well, and I am better, and only wondering that I live.