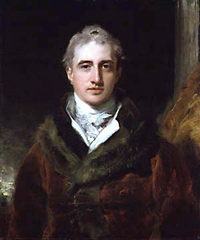 On June 23, 1812, the British government revoked the Orders in Council. On the same day Jonathan Russell in London received two letters from Lord Castlereagh announcing the formal revocation. The Orders in Council had been a response to France's Berlin and Milan Decrees which prohibited British and neutral ships that went to Britain from shipping their cargo to any European port under French control. In turn, the British Orders in Council prohibited British and neutral shipping from carrying goods to the European continent unless they first stopped in a British port and paid for a special licence.  The Orders in Council had been unpopular in the United States and also to manufacturing interests in Britain. The change in British policy meant that one of the main complaints that occasioned the War of 1812 is resolved. Lord Castlereagh's letters and the Prince Regent's order are reproduced below.

I am commanded by the Prince Regent to transmit to you, for your information, the enclosed printed copy of an order in council which His Royal Highness, acting in the name and on the behalf of His Majesty, was this day pleased to issue for the revocation (on the conditions therein specified,) of the orders in council of the 17th January, 1807, and of the 26th of April, 1809, so far as may regard American vessels and their cargoes, being American property, from the 1st August next have the honor so be, &c.
CASTLEREAGH.

In communicating to your Government the order in council of this date, revoking (under certain conditions therein specified) those of January 7th, 1807, and of April 26th, 1809, I am to request that you will at" the same time acquaint them, that the Prince Regent's ministers have taken the earliest opportunity, after the resumption of the Government, to advise His Royal Highness to the adoption of a measure grounded upon the document communicated by you to this office on the 20th ultimo; and His Royal Highness hopes that this proceeding, on the part of the British Government, may accelerate a good understanding on all points of difference between the two States.

I shall be happy to have the honor of seeing you at the Foreign Office at 2 o'clock to-morrow, and beg to apprize you that one of His Majesty's vessels will sail for America with the despatches of the Government in the course of the present week.

ENCLOSURE:
Order in Council. At the court at Carlton House, June 23, 1812: Present, His Royal Highness the Prince Regent in council.

And whereas the chargé des affaires of the United States of America, resident at this court, did, on the 20th day of May last, transmit to Lord Viscount Castlereagh, one of His Majesty's principal Secretaries of State, a copy of a certain instrument then for the first time communicated to this court, purporting to be a decree passed by the Government of France on the 28th day of April, 1811, by which the decrees of Berlin and Milan are declared to be definitively no longer in force in regard to American vessels:

It is further ordered and declared, that all American vessels, and their cargoes, being American property, that shall have been captured subsequently to the 20th day of May last, for a breach of the aforesaid orders in council alone, and which shall not have been actually condemned before the date of this order, and that all ships and cargoes, as aforesaid, that shall henceforth be captured under the said orders prior to the 1st day of August next, shall not be proceeded against to condemnation till further orders; but shall, in the event of this order not becoming null and of no effect, in the case aforesaid, be forthwith liberated and restored, subject to such reasonable expenses on the part of the captors as shall have been justly incurred.

His Royal Highness is hereby pleased further to declare, in the name and on behalf of His Majesty, that nothing in this present order contained shall be understood to preclude His Royal Highness the Prince Regent, if circumstances shall so require, from restoring, after reasonable notice, the orders of the 7th of January, 1807, and the 26th of April, 1809, or any part thereof, to their full effect, or from taking such other measures of retaliation against the enemy as may appear to His Royal Highness to be just and necessary.