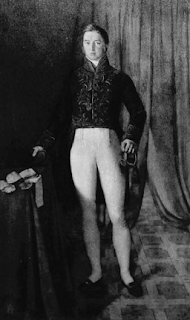 On June 14, 1812,* Augustus Foster, indefatigably continues to spill more ink in a desperate and futile attempt to convince Secretary of State James Monroe of the justness of British policy on the Orders in Council. He is answering Monroe's letter of yesterday. Foster's letter is reproduced below.


Sir: I have the honor to acknowledge the receipt of your letter of the 13th inst. It is really quite painful to me to perceive that, notwithstanding the length of the discussions which have taken place between us, misapprehensions have again arisen respecting some of the most important features in the questions at issue between the two countries, which misapprehensions, perhaps, proceeding from my not expressing myself sufficiently clear in my note of the 10th inst. in relation to one of those questions, it is absolutely necessary should be done away.

I beg leave again to state to you, sir, that it is not the operation of the French decrees upon the British trade with the enemies of Great Britain that has ever formed a subject of discussion between us, and that it is the operation of those decrees upon Great Britain, through neutral commerce only, which has really been the point at issue. Had America resisted the effect of those decrees in their full extent upon her neutral rights, we should never have had a difference upon the subject; but while French cruisers continued to capture her ships under their operation, she seems to have been satisfied if those ships were released by special imperial mandates, issued as the occasion arose, and she has chosen to call municipal an unexampled assumption of authority by France in countries not under French jurisdiction, and expressly invaded for the purpose of preventing their trade with England upon principles directly applicable to, if they could be enforced against America.

I beg you to recollect, sir, that if no revocation has been made of the orders in council, upon any repeal of the French decrees, as hitherto shown by America to have taken place, it has not been the fault of His Majesty's Government. It was France, and afterwards America, that connected the question relative to the right of blockade with that arising out of the orders in council. You well know that, if these two questions had not been united together, the orders in council would have been revoked in 1810. How could it be expected that Great Britain, in common justice to other neutral nations, to her allies, and to herself, should not contend for a full and absolute repeal of the French decrees, or should engage to make any particular concession in favor of America, when she saw that America would not renounce her demand for a surrender, with the orders in council, of some of our most important maritime rights.

Even to this day, sir, you have not explicitly stated, in any of the letters to which you refer me, that the American Government would expressly renounce asking for a revocation of the blockade of 1806, and the other blockades alluded to in Mr. Pinkney's letter; much less have I been able to obtain from you any disclaimer of the right asserted by France to impose upon the world the new maritime code promulgated by France in the late re-publication of her decrees, although I have, by order of my Government, expressly stated their expectation of such disclaimer, and repeatedly called for an explanation upon this point.

I will now say, that I feel entirely authorized to assure you, that if you can at any time produce a full and unconditional repeal of the French decrees, as you have a right to demand it in your character of a neutral nation, and that it be disengaged from any connexion with the question concerning our maritime rights, we shall be ready to meet you with a revocation of the orders in council. Previously to your producing such an instrument, which I am sorry to see you appear to regard as unnecessary, you cannot expect of us to give up our orders in council.

In reference to the concluding paragraph of your letter, in answer to that in mine of the 10th instant, I will only say, that I am extremely sorry to find you think it impossible to devise or conceive any arrangement consistent with the honor, rights, and interests of the United States, which might tend to alleviate the pressure of the orders in council upon the commerce of America. It would have given me great satisfaction if we could have fallen upon some agreement that might have had such effect. My Government, while under the imperious necessity of resisting France with her own weapons, most earnestly desires that the interests of America may suffer as little as possible from the incidental effect of the conflict. They are aware that their retaliatory measures have forced the ruler of France to yield, in some degree, from his hostile decrees; and whether it were more advisable to push those measures rigorously on until they complete the breaking of it up altogether, (the main object of our retaliatory system,) or to take advantage of the partial and progressive retractions of it, produced by the necessities of the enemy, has been a question with His Majesty's Government. It is one on which they .would have been most desirous to consult the interests of America. Under existing circumstances, however, and from our late communications, I have not felt encouraged to make you any written proposal, arising out of this state of things; I shall, therefore, merely again express to you that, as the object of Great Britain has been throughout to endeavor, while forced in behalf of her most important rights and interests to retaliate upon the French decrees, to combine that retaliation with tingreatest possible degree of attention to the interests of America. It would give His Majesty's Government the most sincere satisfaction if some arrangement could be found which would have so desirable an effect.
I have the honor to be, Sec.
AUGUSTUS J. FOSTER.

Notes
* An earlier post had an incorrect date for this letter as having been dated June 11, 1812. In fact the correct date is June 14 1812.  I have deleted the earlier posted.
Posted by FAASouza