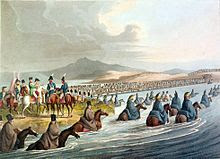 On June 24 1812, in the morning, Napoleon's Grande Armée crosses the Niemen River and the invasion of Russia begins. Philippe-Paul de Segur [1], an eyewitness, describes the scene:


Enthusiasm ran so high that two divisions of the vanguard, contending for the honor of crossing first, almost came to blows and were restrained with difficulty. Napoleon was impatient to set foot on Russian territory.  Without faltering he took that first step toward his ruin.  He stood for a time at the head of the bridge, encouraging the soldiers with his look.  All saluted him with their usual Vive l’Empereur! They seemed more excited than he; perhaps his heart was heavy with the responsibility of so great an aggression, or his weakened body could not bear such excessive heat, or perhaps he was simply disconcerted at finding nothing to conquer.

At length, overcome by impatience, he suddenly galloped off across country and plunged into the forest which skirted the river. He urged his horse on at top speed. In his eagerness it seemed as though he wanted to overtake the enemy all by himself. He rode on in that direction for more than a league without encountering a living soul. Finally he had to turn back to the bridges whence, accompanied by his guard,  he descended the river toward Kovno....

...the only enemy that encountered that day or on the follow days was the heavens. Indeed, the Emperor had hardly crossed the river when the air was shaken by a faint rumble. In a short time the sky had grown black, the wind had risen, bringing to our ears the sinister crash of thunder. The threatening sky, this land without visible shelter, threw gloom over our spirits. Several of our men, recently enthusiastic, were terrified as though this were an ill omen. They fancied that fiery clouds had piled up over our heads and were bursting on this country to prevent our entering it...

That same day a more personal misfortune was added to these general trials. Above Kovno, Napoleon was annoyed to find that the bridge over the Viliya had been destroyed by the Cossacks, preventing Oudinot from crossing. He shrugged this off scornfully, as he did everything that thwarted him, and ordered a squadron of Poles to ford the river. These picked troops obeyed without a moment's hesitation.

At first they advanced in order, and when they were beyond their depth they still forged manfully ahead. They swam together to the middle of the stream, but there the swift current swept them apart. Then their horses took fright. Helplessly adrift, they were carried along by the violence of the current. They no longer tried to swim and lost headway completely. Their riders splashed and floundered in vain. Their strength failed, and finally they gave up the struggle. Their doom was certain; but it was for their country and her liberator that they were sacrificing themselves. As they were about to go down, they turned toward Napoleon and shouted: “Vive l’Empereur!” We noticed three in particular who, their mouths still above water, repeated the cheer and immediately sank. The army was gripped with horror and admiration.