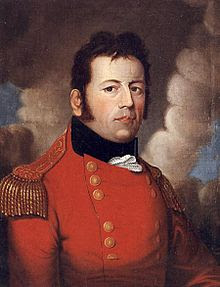 On June 25, 1812, news that war has been declared reaches Upper Canada and Lower Canada. In Quebec City, Sir George Prévost, the Governor General and commander of the British forces in Canada, learns of the declaration of war from a Mr. Richardson on an express for the North West Company. Anne Prévost, Sir George Prévost's seventeen year old daughter, made an entry in her diary for that day:


I was summoned in the midst of my French lesson to hear some news that had arrived. It was indeed an important piece of intelligence:–'America has declared War against England.' The news had arrived by an Express to some of the Quebec merchants. ...On this day I saw nothing before me but my Father's honour and glory. Although I knew how small a force we had to defend the Canadas, such was my confidence in his talents and fortune, that I did not feel the slightest apprehension of any reverse. I thought those abominable Yankees deserved a good drubbing for having dared to think of going to War with England, and surely there was no harm in rejoicing that the War had happened during my Father's Administration, because I thought he was the person best calculated to inflict on the Yankees the punishment they deserved.

Colonel Edward Baynes, on the staff of Sir George Prévost, immediately writes to Major General Brock in Upper Canada. Baynes advises Brock that Prévost has just learned of the  declaration of war.  He writes that Prévost will render "every efficient support in his power" but cannot send any additional troops. Baynes' letter is reproduced below.

Meanwhile, the news of war has also arrived in Upper Canada. On one account, Brock and officers of the 41st Regiment were at Fort George hosting a dinner with their American counterparts from Fort Niagara when the news arrived. The proclamation of war was read. It is said that the men then continued their meal ending with  toasts to both King George III and President James Madison and departing  cordially.

Sir George Prevost desires me to inform you, that he has this instant received intelligence from Mr. Richardson, by an express to the north-west company, announcing that the American government had declared war against Great Britain. This dispatch left New York on the 20th instant, and does not furnish any other circumstance of intelligence whatever. His excellency is induced to give perfect and entire credit to this report, although it has not yet reached through any official channel. Indeed, the extraordinary dispatch which has attended this courier, fully explains his not having received the minister's letters, of which he will not fail to give you the earliest intimation.

Mr. Richardson informs his excellency that it is the intention of the company to send six large canoes to receive their furs by the Grand River, (or Ottawa,) and, should it be thought expedient to reinforce the post of St. Joseph, that they will be able to carry six soldiers in each boat. Anxious as Sir George feels to render you every aid in his power, and to afford every possible assistance and protection to the north-west company, who have on their part assured his excellency of their ready and active co-operation to the utmost of their ability, his excellency, nevertheless, does not think it advisable, under existing circumstances, to weaken the 49th regiment, which occupies so important and critical a station; nor can he hold out any certain prospect of any further reinforcement until the arrival of the troops he has been led to expect from England, but directs me to assure you of his cordial wish to render you every efficient support in his power.