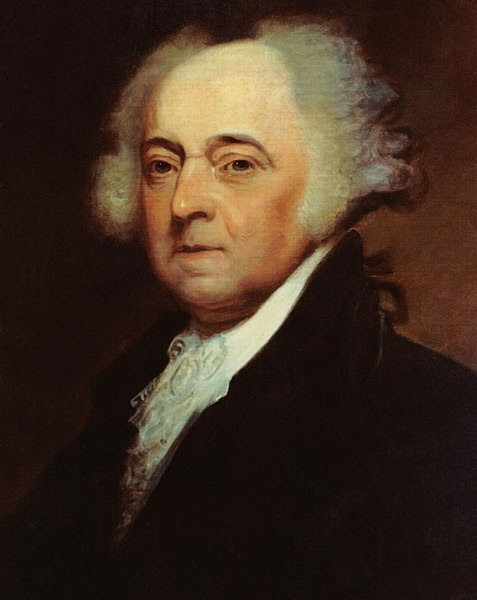 On June 12, 1812, John Adams in a typically eccentric letter has religion on his mind and writes a long rambling letter to Benjamin Rush. Adams writes that the National Fast he recommended while president cost him the election to Jefferson. He writes: "The National Fast recommended by me turned me out of office.... I was represented as a Presbyterian and at the head of this political and ecclesiastical Project. The secret whispers ran through them [all the sects] "Let us have Jefferson, Madison, Burr, any body, whether they be Philosophers, Deists, or even Atheists, rather than a Presbyterian President." His conclusion is that "Nothing is more dreaded than the National Government meddling with Religion". Adams also will not have anything to do with a nostalgia that argues that there was no acrimony or division during the American Revolution. He writes: "Nothing can be farther from the Truth. We were more divided in 74 than we are now." Adams' letter is reproduced below.

DEAR Sir, – Ask the great Lady you quoted in your last, whether when I pray for the health of Philadelphia, and that, no wasting sickness may prevail there, I make a Girlish or a coying compliment to Doctor Rush?

The next paragraph requires a graver answer. But a Volume would not suffice. Take a hint. I have lived among Infidel Philosophers more than half a Century, and been engaged in continued disputes with them. This has compelled me to spend more time in reading Universal History but especially Ecclesiastical History, than has been for my Interest or Comfort. While the Result has been an increasing Love for Christianity, as I understand it, a growing Jealousy of the Priesthood has accompanied it all the way. Levites, Magi, Faquirs, Mandarines, Mufti, Druids, Popes; Cardinals, Archbishops, Bishops, Bernardines , Jacobins, Dominicans, Westleys, the Prophet of Wabash, or Tippecanoe, Nimrod Hughs, Christopher McPherson, and even Priestly and Price, even Dr. Ewing, Dr. Rogers and Dr. Dwight have conspired together to rivet to my soul the Duty and Necessity of Tolleration.

These general assemblies of Presbyterian Divines are general Councils in embrio. We shall have Creeds and Confessions, Church discipline and Excommunication. We shall have, the civil Government overawed and become a Tool. We shall have Armies and their Commanders under the orders of Monks. We shall have Hermits, commanding Napoleons, I agree with you, there is a Germ of Religion in human nature so strong that whenever; an order of Men can persuade the People by, flattery or Terror, that they can have salvation at their disposal, there can be no end to fraud Violence or Usurpation. Ecumenical Councils produce Ecumenical Bishops and both subservient Armies, Emperors and Kings.

The National Fast recommended by me turned me out of office. It was connected with the general assembly of the Presbyterian church, which I had no concern in. That assembly has alarmed and alienated Quakers, Anabaptists, Mennonists, Moravians, Swedenborgians, Methodists, Catholicks, protestant Episcopalians, Arians, Socinians, Armenians, &c,&c,&c, Atheists and Deists might be added. A general Suspicion prevailed that the Presbyterian Church was ambitious and aimed at an Establishment as a National Church. I was represented as a Presbyterian and at the head of this political and ecclesiastical Project. The secret whispers ran through them [all the sects] "Let us have Jefferson, Madison, Burr, any body, whether they be Philosophers, Deists, or even Atheists, rather than a Presbyterian President" This principle is at the bottom of the unpopularity of national Fasts and Thanksgiving. Nothing is more dreaded than the National Government meddling with Religion. This wild Letter, I very much fear, contains seeds of an Ecclesiastical History of the U.S. for a Century to come.

I recollect a little sparring between Jefferson and me on some religious subject, not ill natured however, but have forgotten the time, and the particular subject. I wish you would give me the circumstances of the whole Anecdote.

The similitude between 1773 and 1774, and 1811 and 1812 is obvious. It is now said by the Tories that we were unanimous in 1774. Nothing can be farther from the Truth. We were more divided in 74 than we are now. The Majorities in Congress in 74 on all the essential points and Principles of the Declaration of Rights, were only one, two or three. Indeed all the great critical questions about Men and Measures from 1774 to 1778 were decided by the vote of a single state, and that vote was often decided by a single Individual. Jumble and Chaos as this Nation appears at this moment, I never knew it better united. It is always so. The History of the World is nothing but a narrative of such divisions. The Stuarts abdicated or were turned out and William came in by one or two votes. I was turned out by the votes of S. Carolina not fairly obtained. Jefferson came in by one vote, after 37 Tryals between him and Burr. Our expedition against Cape Breton and consequent Conquest of Louisburg in 1745 which gave peace to the World was carried in our House of Representatives of Massachusetts by one single vote. The abolition of old Tenor in 1750 was decided by one vote. What is more awful than all. The Trinity was carried in a general Council by one vote against a Quaternity: the Virgin Mary lost an equality with the Father, Son and Spirit only by a single suffrage. All the great affairs of the world temporal and spiritual, as far as Men are concerned in the discussion and decision of them are determined by small Majorities. The Repulsion in human nature is stronger than the Attraction. Division, Separation are inevitable. My Boudoir, which you sometimes honour with your recollection is but an exemplification in all ages and Nations of this repulsive Power. I know not whether you have ever seen a Boudoir. I never heard of one in G. Britain or America. I had two of them in my House at Auteuil, which was nothing less than the magnificent Hotel de Rohan. A boudoir is a pouting Room. The Idea is, when the Lady has the vapours, and is a little out of health or humour she may retire to a Bath in the Centre of this apartment and contemplate her own Face and figure in every possible direction and position, till the sight of her own irresistible Charms shall restore her good opinion of herself, and her usual gaiety and good humour. The Room is an Octagon. Eight entire and imaculate French Mirrors extending from the floor to the Ceiling compose the eight sides. The Ceiling too is one entire Mirror. So that the Lady cannot turn to any point of the compass without seeing herself multiplied an hundred times, indeed ad infinitum. My Boudoir is such a room; in which our dear United States may contemplate themselves and see their own defects as well as Beauties. I hope it will never be used to teach wanton Experiments, as it is easy to see the Ladies bathing room may be. As old Men are apt to repeat, I may have told you this story before more than once. By my Boudoir, I mean the three volumes of "Defence," and a fourth volume as an Appendix call "Discourses on Devils."

When I hear a Man boast of his indifference to public Censure, I think of Henry the 4th. A Braggadocio in his Army solicited advancement and command and to enforce his Pretensions, he extolled and exalted his own Courage. "Sire, I know not what fear is; I never felt fear in my Life." "I presume then, Sir," said the good natured Monarch, "you never attempted to snuff a Candle with your thumb and finger."

Let Mrs. Rush laugh at my Girlish Folly as she will [which I cannot in honor or conscience deny] I will confess and insist upon it, that your gentle emolients feel more comfortable to my skin, than the Blisters of Paine, Hamilton and Callender.

I have heard much of Washington's impatience under the lash of scribblers, some of it from his own mouth. Mr. Lear related to me on Morning the Generals ripping and rascalling Phillip Freneau for sending him his Papers full of abuse.

Many causes concurred to induce the General's Resignation.

1. His ministers plagued him as they did me, afterwards.
2. He could not get Ministers such as he wanted, to serve with Hamilton. Several refused, and he was compelled to take such as he did not like, particularly Pickering and McHenry. This I know from his own Mouth.
3. He knew there was to be an opposition to him at the next Election and he feared he should not come in unanimously.
4. The Times were critical, the labour fatiguing, many Circumstances disgusting and he felt weary and longed for retirement; though he soon found solitude more fatiguing, more disgusting, and longed to return to public Bustle again. Besides my Popularity was growing too splendid and the Millions of Addresses to me from all quarters piqued his Jealousy. The great Eulogium "First in War, first in Peace, and first in the affections of his Country" was suspected by him and all his Friends to be in some danger.
5. I believe he expected to be called in again after a four years respite, as he certainly would have been had he lived. I heartily wished he might life or had lived for that very purpose, and I expressed as much in my answer to the Senates address upon his death. I was then convinced we must have him or Jefferson and I though him then the least visionary of the two. Considering his Connection with Hamilton, I an now not so clear I was then right.
I must come to an end of my Letter though I shall never find an end of my Regards to Mrs. Rush or her Husband notwithstanding her just admonition to the incurable, incorrigible scribber, John Adams