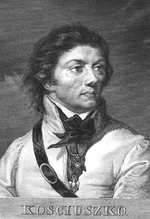 On June 28, 1812, Thomas Jefferson writes to General Thaddeus Kosiusko to tell him that war has commenced against Great Britain. Kosiusko was a Polish nationalist, who had served with great distinction as a military engineer with the American army during the revolution. He was a good friend of Jefferson. Jefferson's letter is of interest because Jefferson writes in an imaginative and cold blooded way about his views on how to fight the war with Britain. Jefferson  assumes that Britain will be supreme at sea.  He can speak with some authority on this as he was responsible for having gutted the American navy. Jefferson writes: "Our present enemy will have the sea to herself, while we shall be equally predominant at land, and shall strip her of all her possessions on this continent. She may burn New York, indeed, by her ships and congreve rockets, in which case we must burn the city of London by hired incendiaries, of which her starving manufacturers will furnish abundance." There is an outlandishness to Jefferson's suggestions but also an imaginative ruthlessness that would probably have made him a far superior war president than James Madison. In this regard, it has to be acknowledged that Madison set the bar rather low. Jefferson's letter to o General Thaddeus Kosciusko is reproduced below.


Nous voila donc, mon cher ami, en guerre avec l'Angleterre. This was declared on the 18th instant, thirty years after the signature of our peace in 1782. Within these thirty years what a vast course of growth and prosperity we have had! It is not ten years since Great Britain began a series of insults and injuries which would have been met with war in the threshold by any European power. This course has been unremittingly followed up by increasing wrongs, with glimmerings indeed of peaceable redress, just sufficient to keep us quiet, till she has had the impudence at length to extinguish even these glimmerings by open avowal. This would not have been borne so long, but that France has kept pace with England in iniquity of principle, although not in the power of inflicting wrongs on us. The difficulty of selecting a foe between them has spared us many years of war, and enabled us to enter into it with less debt, more strength and preparation. Our present enemy will have the sea to herself, while we shall be equally predominant at land, and shall strip her of all her possessions on this continent. She may burn New York, indeed, by her ships and congreve rockets, in which case we must burn the city of London by hired incendiaries, of which her starving manufacturers will furnish abundance. A people in such desperation as to demand of their government aut parcem, aut furcam, either bread or the gallows, will not reject the same alternative when offered by a foreign hand. Hunger will make them brave every risk for bread. The partisans of England here have endeavored much to goad us into the folly of choosing the ocean instead of the land, for the theatre of war. That would be to meet their strength with our own weakness, instead of their weakness with our strength. I hope we shall confine ourselves to the conquest of their possessions, and defence of our harbors, leaving the war on the ocean to our privateers. These will immediately swarm in every sea, and do more injury to British commerce than the regular fleets of all Europe would do. The government of France may discontinue their license trade. Our privateers will furnish them much more abundantly with colonial produce, and whatever the license trade has given them. Some have apprehended we should be overwhelmed by the new improvements of war, which have not yet reached us. But the British possess them very imperfectly, and what are these improvements? Chiefly in the management of artillery, of which our country admits little use. We have nothing to fear from their armies, and shall put nothing in prize to their fleets. Upon the whole, I have known no war entered into under more favorable auspices.

Our manufacturers are now very nearly on a footing with those of England. She has not a single improvement which we do not possess, and many of them better adapted by ourselves to our ordinary use. We have reduced the large and expensive machinery for most things to the compass of a private family, and every family of any size is now getting machines on a small scale for their household purposes. Quoting myself as an example, and I am much behind many others in this business, my household manufactures are just getting into operation on the scale of a carding machine costing 60 only, which may be worked by a girl of twelve years old, a spinning machine, which may be made for $10, carrying 6 spindles for wool, to be worked by a girl also, another which can be made for $25, carrying 12 spindles for cotton, and a loom, with a flying shuttle, weaving its twenty yards a day. I need 2,000 yards of linen, cotton and woollen yearly, to clothe my family, which this machinery, costing $150 only, and worked by two women and two girls, will more than furnish. For fine goods there are numerous establishments at work in the large cities, and many more daily growing up; and of merinos we have some thousands, and these multiplying fast. We consider a sheep for every person as sufficient for their woollen clothing, and this State and all to the north have fully that, and those to the south and west will soon be up to it. In other articles we are equally advanced, so that nothing is more certain than that, come peace when it will, we shall never again go to England for a shilling where we have gone for a dollar's worth. Instead of applying to her manufacturers there, they must starve or come here to be employed. I give you these details of peaceable operations, because they are within my present sphere. Those of war are in better hands, who know how to keep their own secrets. Because, too, although a soldier yourself, I am sure you contemplate the peaceable employment of man in the improvement of his condition, with more pleasure than his murders, rapine and devastations.

Mr. Barnes, some time ago, forwarded you a bill of exchange for 5,500 francs, of which the enclosed is a duplicate. Apprehending that a war with England would subject the remittances to you to more casualties, I proposed to Mr. Morson, of Bordeaux, to become the intermediate for making remittances to you, which he readily acceded to on liberal ideas arising from his personal esteem for you, and his desire to be useful to you. If you approve of this medium I am in hopes it will shield you from the effect of the accidents to which the increased dangers of the seas may give birth. It would give me great pleasure to hear from you oftener. I feel great interest in your health and happiness. I know your feelings on the present state of the world, and hope they will be cheered by the successful course of our war, and the addition of Canada to our confederacy. The infamous intrigues of Great Britain to destroy our government (of which Henry's is but one sample), and with the Indians to tomahawk our women and children, prove that the cession of Canada, their fulcrum for these Machiavelian levers, must be a sine qua non at a treaty of peace.

God bless you, and give you to see all these things, and many and long years of health and happiness.