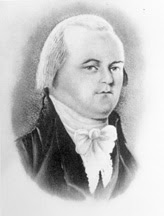 On June 12, 1812, the Senate continues its debate on the House's bill entitled "An act declaring war between Great Britain and her dependencies, and the United States and their territories." The Senate had set up a select committee to consider the President's message of June 1, 1812. This committee was chaired by Senator Joseph Anderson of Tennessee (pictured on the left). The committee was then given the task of reviewing the House's war bill on June 5. The various deliberations that followed showed how divided Senators were on the issue of war. Some senators wanted to limit the declaration of war to allow only for reprisals by  American War ships and privateers on Britain.  A vote on June 12, 1812, provided for such a limitation and passed by 17-13. Other senators were against any declaration of war. Some senators  wanted war against both France and England.

On June 12, 1812, Senator Anderson read his committee's report which proposed substantial amendments to the bill passed by the House.
To understand the scope of the changes we have to look at the language of the House's bill which read

Senator Anderson's committee proposed to strike everything after the word THAT and insert EIGHT new subsections which can be found here. The amendments basically provided for a naval war and specified the legal procedures to deal with any captured property or salvage rights.  Some of these new sections read:

"Sec 1. The President of the United States shall be, and he is hereby, authorized, from and after the ___ day of____ next ensuing, to cause reprisals to be made upon the public and private ships and vessels, goods, and merchandise, belonging to the crown of the United Kingdom of Great Britain and Ireland, or to the subjects thereof, which may be found an the high seas or elsewhere, after the said____ day of ___next, excepting...

Sec. 6. And ti be further enacted, That all vessels, goods, and effects the property of any citizen of the United States, or person resident therein, which shall be recaptured as aforesaid, shall be restored to the lawful owners upon payment by them respectively of a just and reasonable salvage, to be determined by the mutual agreement of the parties concerned, or by the decree of the the United States having maritime jurisdiction, according to the nature of each case: provided that such allowance shall not be less than one-eighth, or exceeding one-half, of the full value of such recapture, without any deduction; and such salvage shall be distributed to and among- the owners, officers, and crews, of the private armed vessel or vessels entitled thereto, according to any agreement which shall be between them, or, in case of no agreement, then by the decree of the court who shall determine upon such salvage.

Section 7. And be it further enacted, That, before breaking bulk of any vessel which than be captured as aforesaid, or other disposal or conversion thereof, or of any articles which shall be found on board the same, such capture shall be brought into some port of the United States, and shall be libelled and proceeded against before the district court of the same district; and if, after a due course of proceeding, such capture shall be decreed as forfeited in the district court, or in the circuit court of the same district in the case of any appeal duly allowed, the same shall be delivered to the owners and captors concerned therein, or shall be publicly sold by the marshal of the name court, as shall be finally decreed and ordered by the court. And the same court, who shall have final jurisdiction of any libel or complaint of any capture as aforesaid, shall and may decree restitution in whole or in part, when the capture and restraint shall have been made without just cause as aforesaid; and if made without probable cause, or otherwise unreasonably, may order and decree damages and costs to the party injured, and for which the owners, officers, and crews, of the private armed vessel or vessels by which such unjust capture shall have been made, and, also, such vessel or vessels, shall be answerable and liable.

The Committee also wanted to amend the title of the act so that it read "An Act authorizing reprisals against the crown of the United Kingdom of Great Britain and Ireland, and the subject thereof."


After the report was read, Senator Gaillard was requested to take the chair; and the bill and amendments were considered as in a committee of the whole. Senator Pope brought a motion to amend the report, by insert, after the word "thereof," in the tenth line of the first section, the words "and, also, upon the public and private ships and vessels, goods, and merchandise, belonging to the crown of France or to the subjects thereof." This motion was determined in the negative: yeas 15 and nays 17.

The select committee's report was then put to a vote which resulted in a tie: yeas 16 and  nays 16. The Senate being equally divided the report was lost.  The practical result was that the Senate was back to considering the House's War bill even though there were some minor amendments proposed.
Posted by FAASouza