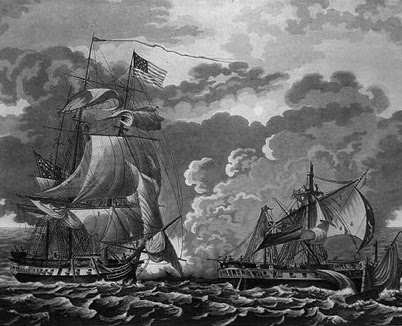 James Crooks and his brother William Crooks were prominent citizens of the British Province of Upper Canada. They denied that any allegation of wrongdoing. They also tried to post security to have the vessel returned to them so they could pursue their legal remedies in the American courts. The declaration of war thirteen days later frustrated these plans. The Americans expropriated the vessel paying some $3,000 with these monies beingpaid into the New York court to await any legal proceedings. The vessel was then renamed the USS Scourge and armed it with ten or twelve cannons. It was placed in Captain Isaac Chauncey's squadron patrolling Lake Ontario during the war. In August 1813, the Scourge, together with the Hamilton, sank off Fourteen Mile Creek after being hit by a sudden summer squall.  Some 53 sailors were lost and only 19 survived.

The Crooks had to wait until the end of the war to again try to obtain compensation for what they viewed as an illegal act by the American government.  They could not have anticipated that they were to commence a legal odyssey that would rival the fictional case of Jarndyce v. Jarndyce in Charles Dickens’ Bleak House and last some 118 years.

Their first legal action was deceptively quick and successful. In 1817, a New York court ordered the American government to pay the brothers the sum of $3,000 in damages. The brothers could thus be paid the monies that had been paid into the New York Court. Unfortunately, these funds had been embezzled by a court clerk. When the clerk was captured the stolen money was not found. Undeterred, James Crooks continued to seek legal redress for the next 43 years until his death in 1860. His efforts included lobbying the U.S. presidents, the House of Representatives and the Senate. All were favourably disposed, but no monies were forthcoming.

On the death of James Crooks, the legal fight for compensation was taken over by James' fourth son, Adam Crooks. Adam was by most accounts a brilliant scholar, standing first in class in every year he stood and receiving first prize medals in both classics and metaphysics from the University of Toronto. He also studied and excelled at law becoming a noted legal scholar and brilliant litigator. His brilliance continued into politics where he was appointed on December 20, 1871 as attorney general in the Liberal government of Edward Blake. He went on to serve in the governments of Oliver Mowat as provincial treasurer. He helped passed some important legislation such as the Mechanics Lien Act [important at least to the author] and the more important Married Women’s Real Estate Act. The latter allowed married women in 1873 to hold property in their own name. His political career culminated with his appointment on February 19, 1876 as Ontario’s first minister of education.

Throughout this period, Adams continued the legal fight for compensation for the loss of the Lord Nelson. This fight was carried on by Adam's law partner Nicol Kingsmill, who would  spend decades on the case. The intervention of the American Civil War understandably hindered the legal fight. In addition, Adam probably could not devote much of time given his extensive political duties. These duties took their toll and Adam's health began to decline in the early 1880's and he was afflicted with a form cerebral palsy. In January 1883, while sitting in the Ontario legislature, Adam collapsed. Premier Mowat had no choice but to remove him from cabinet. Tragically, Adams chose to run in the next election in March 1883. He won the election but was not allowed to keep his seat when a legislative committee on privileges and elections concluded that he was “incurably insane.” His seat was declared  vacant. Friends of Adams sought medical help for him in Europe but without success. Adams  died in 1885 in an asylum in Hartford Connecticut.

Meanwhile, the fight for compensation for the Lord Nelson continued. Nicol Kingsmill, still the lawyer for the Crooks family, was able to get to President Grover Cleveland in 1886 to urge Congress to pay compensation for the loss of the Lord Nelson.  In 1895, Alexander David Crooks, the grandson of James Brooks and also a lawyer, joined the fight. The family hired an American lawyer by the name of Colonel Charles Lincoln to try and pass an  appropriations bill through Congress for compensation but nothing came of this attempt.

On the death of Nicol Kingsmill, Alexander Drake inherited the legal case for the Lord Nelson. He tried a new approach by launching proceedings before the Arbitral Tribunal, a special international arbitration body that had been set up in 1910 to deal with disputes between Great Britain and the United States. In 1914, the Arbital Tribunal concluded in favour of the heirs of the Crooks brothers. They were awarded $5,000 in damages for the ship and about $19,000 in interest. After deducting legal expenses, this meant that the remaining 25 heirs of the Crooks family were to share about $15,000. As the Crooks family were finally to received some compensation after awaiting over a hundred years, the First World War was declared and the family was again disappointed. The Crooks family had to wait for another 16 years before they received any monies.  It was only in March 1930 that the award was finally paid to the heirs. Alexander Drake receive $476.23 and a few thousand dollars for his legal fees nearly 118 years after the Lord Nelson had been captured by an American ship on Lake Ontario on June 5, 1812.

The above posting is based on the information found here and the article  in the Law Times,  "Lawyer’s epic legal battle over family’s sunken ship revisited" May 28, 2012 by  Paul Legall which can be found here.  Further details, are provided from entries for James Crooks and Adam Crooks in the Canadian Dictionary of Biography Online.