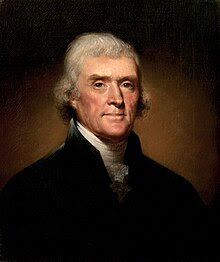 On June 17 1812, Thomas Jefferson writes to Judge John Taylor about the common law. Jefferson's letter highlights that, aside from his many other areas of expertise, Jefferson was also a very fine lawyer. In the letter, Jefferson is at pains to give an American foundation to law based on the rights of men as opposed to what he views as the more narrow British "common law rights" He writes: "...the application of the common law to our present situation, I deride with you the ordinary doctrine, that we brought with us from England the common law rights. This narrow notion was a favorite in the first moment of rallying to our rights against Great Britain. But it was that of men who felt their rights before they had thought of their explanation. The truth is, that we brought with us the rights of men; of expatriated men." As Jefferson continues he is forced to concede that the common law has been adopted in America but he draws the line at relying on any British authorities from after the Declaration of Independence.  He would have preferred to have had a civil code as a opposed to a judge based common law. This letter reflects many of the ongoing tensions of American jurisprudence at their most basic and original foundations. Jefferson's full letter is reproduced below.

Dear Sir,— * * * * * * *
On the other subject of your letter, the application of the common law to our present situation, I deride with you the ordinary doctrine, that we brought with us from England the common law rights.  This narrow notion was a favorite in the first moment of rallying to our rights against Great Britain.  But it was that of men who felt their rights before they had thought of their explanation.  The truth is, that we brought with us the rights of men;  of expatriated men.  On our arrival here, the question would at once arise, by what law will we govern ourselves? The resolution seems to have been, by that system, with which we are familiar, to be altered by ourselves occasionally, and adapted to our new situation.  The proofs of this resolution are to be found in the form of the oaths of the judges, 1.  Hening’s Stat. 169. 187;  of the Governor, ib. 504;  in the act for a provisional government, ib. 372;  in the preamble to the laws of 1661-2;  the uniform current of opinions and decisions, and in the general recognition of all our statutes, framed on that basis.  But the state of the English law at the date of our emigration, constituted the system adopted here.  We may doubt, therefore, the propriety of quoting in our courts English authorities subsequent to that adoption;  still more, the admission of authorities posterior to the Declaration of Independence, or rather to the accession of that King, whose reign, ab initio, was the very tissue of wrongs which rendered the Declaration at length necessary.  The reason or it had inception at least as far back as the commencement of his reign.  This relation to the beginning of his reign, would add the advantage of getting us rid of all Mansfield’s innovations, or civilizations of the common law.  For however I admit the superiority of the civil over the common law code, as a system of perfect justice, yet an incorporation of the two would be like Nebuchadnezzar’s image of metals and clay, a thing without cohesion of parts.  The only natural improvement of the common law, is through its homogeneous ally, the chancery, in which new principles are to be examined, concocted and digested.  But when, by repeated decisions and modifications, they are rendered pure and certain, they should be transferred by statute to the courts of common law, and placed within the pale of juries.  The exclusion from the courts of the malign influence of all authorities after the Georgium sidus became ascendant, would uncanonize Blackstone, whose book, although the most elegant and best digested of our law catalogue, has been perverted more than all others, to the degeneracy of legal science.  A student finds there a smattering of everything, and his indolence easily persuades him that if he understands that book, he is master of the whole body of the law.  The distinction between these, and those who have drawn their stores from the deep and rich mines of Coke and Littleton, seems well understood even by the unlettered common people, who apply the appellation of Blackstone lawyers to these ephemeral insects of the law.

Whether we should undertake to reduce the common law, our own, and so much of the English statutes as we have adopted, to a text, is a question of transcendent difficulty.  It was discussed at the first meeting of the committee of the revised code, in 1776, and decided in the negative, by the opinions of Wythe, Mason and myself, against Pendleton and Thomas Lee.  Pendleton proposed to take Blackstone for that text, only purging him of what was inapplicable or unsuitable to us.  In that case, the meaning of every word of Blackstone would have become a source of litigation, until it had been settled by repeated legal decisions.  And to come at that meaning, we should have had produced, on all occasions, that very pile of authorities from which it would be said he drew his conclusion, and which, of course, would explain it, and the terms in which it is couched.  Thus we should have retained the same chaos of law-lore from which we wished to be emancipated, added to the evils of the uncertainty which a new text and new phrases would have generated.  An example of this may be found in the old statutes, and commentaries on them, in Coke’s second institute, but more remarkably in the institute of Justinian, and the vast masses explanatory or supplementary of that which fill the libraries of the civilians.  We were deterred from the attempt by these considerations, added to which, the bustle of the times did not admit leisure for such an undertaking.

Your request of my opinion on this subject has given you the trouble of these observations.  If your firmer mind in encountering difficulties would have added your vote to the minority of the committee, you would have had on your side one of the greatest men of our age, and like him, have detracted nothing from the sentiments of esteem and respect which I bore to him, and tender with sincerity the assurance of to yourself.
Posted by FAASouza